The Man Working to Sustain Hopi Dry Farming in Arizona

For thousands of years, many indigenous agricultural practices relied only on precipitation for farming. They also developed a symbiotic relationship with their environment through careful observation and years of experimentation.

Dr. Michael Kototuwa Johnson is a Hopi descendant and practitioner of Native American land practices referred to as dryland farming, a tradition of his people for over two millennia. The Hopis are one of the oldest living cultures in recorded history, dating back thousands of years. The tribe currently lives on 1.5 million acres in Northeastern Arizona, which is only a small fraction of their traditional lands.

Dr. Johnson lives in a self-constructed stonehouse in northeastern Arizona up on the Little Colorado Plateau near Kykotsmovi Village, about a 90-minute drive from Flagstaff. This area is a semi-arid environment, receiving six to 10 inches of annual rainfall a year, which isn't much. While conventional crop scientists insist that a farmer needs over 30 inches of annual rainfall a year to grow corn, Hopi dryland farming challenges this assertion. Hopi farming techniques are designed to conserve as much soil moisture as possible. For thousands of years, Hopi farmers have grown corn, beans, and squash in this harsh environment, and Dr. Johnson is working to ensure that Hopi dry farming traditions continue.

When asked why he doesn’t irrigate his crops to increase yields, Dr. Johnson simply replies: “Well, then what would we pray for?” Hopi farming is a testament to his faith. And faith is tied directly to water. That’s what makes Hopi agriculture so resilient–it’s faith-based. This means it can withstand droughts, seasons with minimal growth, and the cycles of life. It's important to Dr. Johnson to continue this practice, and part of that practice means not bringing man-made lines to irrigate crops. Hopi seeds, or what he refers to as “hardy” seeds, would not know what to do with all the extra water. They have been adapted to grow within an unmanipulated environment—a quintessential trait of Hopi farming: raising crops to fit the environment, rather than manipulating the environment to fit the crops. 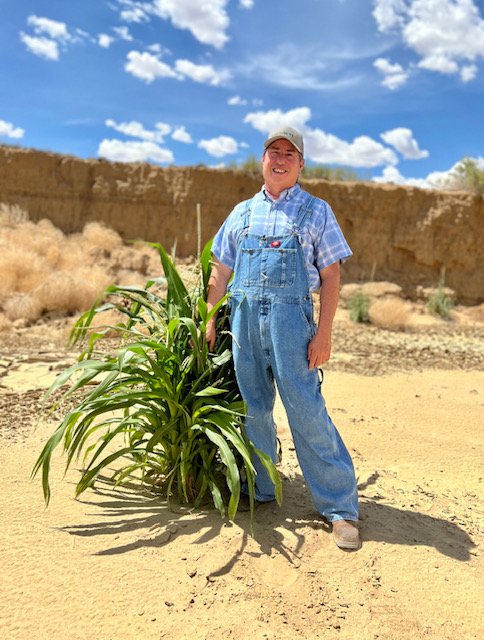 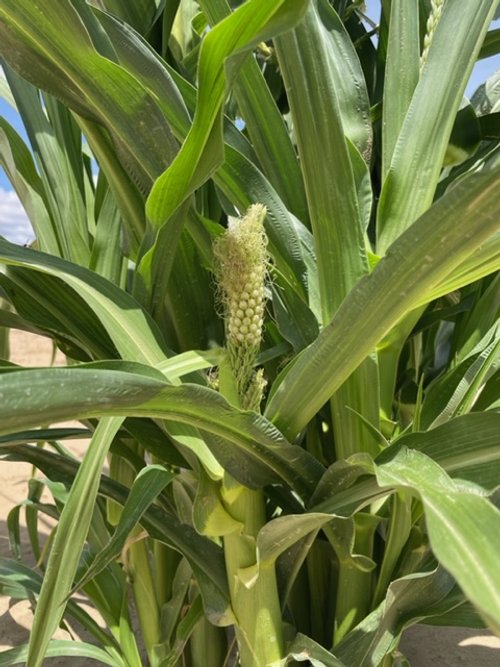 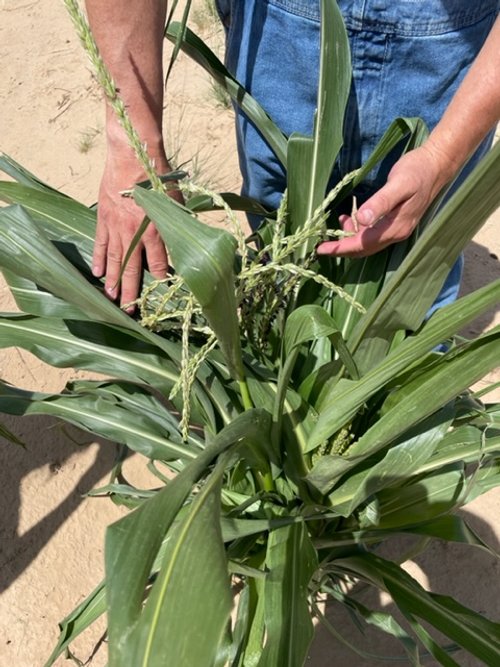 Conventional corn planting practices place seeds one to two inches deep, but Dr. Johnson plants his heritage, arid-adapted seeds as deep as six to 18 inches, depending on the soil moisture left from the winter’s melted snow. When Hopi corn germinates, the seed grows a thick root downward, searching for water that lies deeper in the ground, and sends a shoot upward toward the surface. These seed adaptations–called elongated epicotyl–are missing in conventional varieties and unique to Hopi corn biodiversity, leading to its resiliency for two millennia. 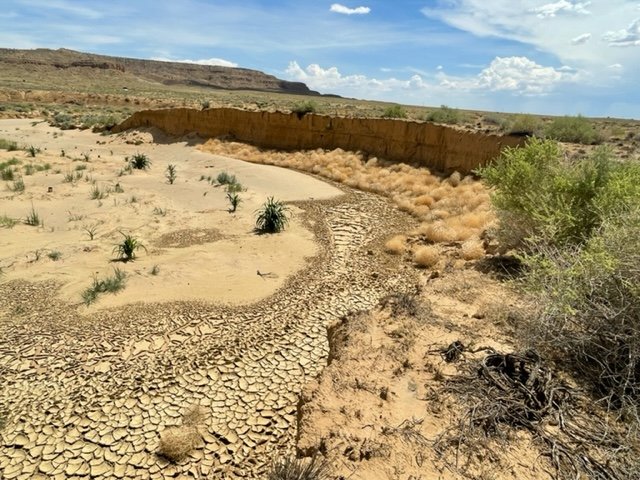 Dr. Johnson plants his corn in sandy washes and grows his crops in sandy and clay loam soils that offer a mulch-like service by retaining soil moisture. Hopi planting techniques have evolved over thousands of years of adaptation and involve bundling seeds together when they are planted, burying the seeds deep into the ground, planting corn in multiple fields and dissimilar locations, and observing the natural flow of flood/rain runoff to ensure the greatest potential for crop harvest success.

To be a Hopi farmer, Dr. Mike points out that you have to be an agronomist, a hydrologist, and an engineer. A person has to be a little bit of everything to grow crops as Hopi farmers do. And although knowledge is important, Dr. Mike stresses that there is more love and care to Hopi farming than actual science. He refers to his corn stalks as his children and tends to them daily. He often talks and sings to them, encouraging them to grow strong. If one has fallen down, he packs the soil around the stalk to help it stand straight again. He frequently checks for pests or damage done to his corn children. If a monsoon flood drowns his crops, he loses more than just food—he loses part of his family. 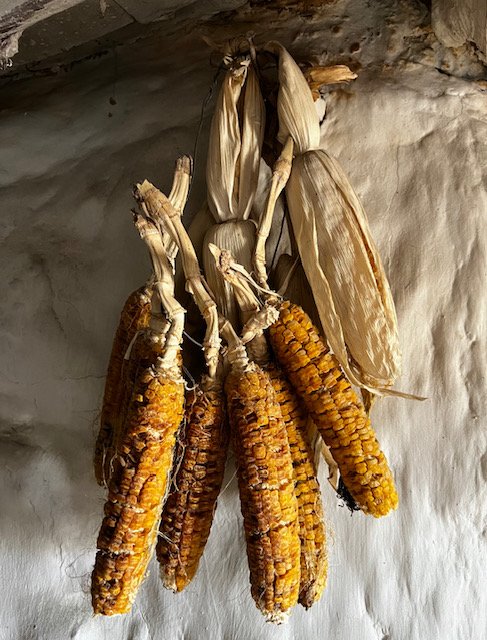 Hanging on the wall inside Dr. Johnson’s stonehouse is a bundle of dried corn strung together— Hopi food security. Because Hopi farming does not yield crops in years where there is little soil moisture, Hopi tradition teaches to plant two to five years’ worth of corn in times when there is enough moisture. Excess harvest is then preserved using an outside underground pit as an oven. The corn can then be rehydrated by boiling it until the kernels return to their plump, edible form. Hopi planting practices take into account climatic fluctuations and forward thinking to ensure there is enough food in times of famine.

The Role of Women in Hopi Farming

When Dr. Johnson speaks about traditional Hopi agriculture, he stresses the crucial, centering role that women play before, during, and after a harvest. It is Hopi women who “own” the fields, provide the seeds to be planted, and preserve seeds after the harvest. Women carefully select the seeds to save and store for future growing seasons, which determines the crop genetics carried on from generation to generation. Women also prepare traditional Hopi meals, such as piiki, to distribute to the community and use for ceremonies. Women also sit at the center of Hopi farming and govern its agricultural system.

Hopi farming appreciates the relationships between living beings in a specific ecosystem and centers around direct contact with the environment. This knowledge is handed down through generations and used for life-sustaining ways rather than for economic gain. Caring for the land and viewing plants as family members have allowed the Hopi people to survive. Dr. Johnson often refers to this as Indigenous Regenerative Agriculture (IRA), which he defines as “the process of incorporating place-based ways of knowing supported by culture, belief systems, and environmentally derived survival schemes over millennia.” The resiliency of Hopi agriculture has been tested and adapted for over 2,000 years without the use of pesticides, herbicides, and man-made irrigation systems, which are commonly used in modern conventional agriculture. It is the Hopi people’s intimate knowledge of their environment that has allowed them to overcome the many challenges of farming. Hopi farming is sustainable, conserves biodiversity, and protects the land.

The covenant of Hopi farming is vital to resiliency within the Hopi community, not only to ensure food security but to engage more people in traditional Hopi practices.

In 2004, the Natwani Coalition, a project of the Hopi Foundation that is supported by the Native American Agriculture Fund, conducted a comprehensive assessment of Hopi food, health, and farming practices. The results showed that less than a third of the Hopi interviewees still farm. Dr. Johnson adds that roughly 15% of tribal members on the reservation are raising crops, drastically down from about 85% in the 1930s. Like most cultures, Hopi members have been affected by the modern system that leaves little time for farming and reliance on grocery stores and conventionally processed foods.

Access to food, in general, is a challenge with tribal members driving up to two hours (one way) to the closest towns of Winslow or Flagstaff. According to the assessment, the Hopi spend almost $7 million a year to transport food to their community and pay a 66% premium for that food. Hopi consumers spend roughly $2,000 a year more than other consumers when it comes to bringing food into their homes, while the per capita income for reservation residents is about $12,000 a year.

Because the United States holds legal title to reservation lands and the tribe holds the “beneficial title,” the Hopi do not own their lands. Like other Native American tribes, the Hopi tribe is in a trust relationship with the federal government. In other words, they can live on the land, but they do not have absolute title to it. This situation leads to significant barriers for Hopi farmers, as they cannot make decisions about their lands or govern in a way that adapts to changing circumstances without first obtaining approval from the federal government. In the Hopi assessment that revealed how less than a third of the Hopi interviewees still farm, those same respondents were 10 times more likely to cite access to land as the cause more than any other factor for not farming. Community members also said lack of water and access to productive lands were other main barriers to farming.

Another significant challenge that Hopi farmers face is access to capital and federal funding. Native American farmers have historically lacked access to the financial support and subsidies that conventional farmers receive, like participating in the U.S. Department of Agriculture’s (USDA) programs through the Natural Resources Conservation Service (NRCS) which provides financial support to help farmers implement conservation practices. Dr. Johnson explains how tribes face barriers to receiving Payments for Ecosystem Services (PES) programs that severely limit their adaptive capacities to address environmental challenges and preserve their agricultural techniques. In his dissertation and subsequent publications, Dr. Johnson wrote that Indigenous farmers’ “holistic natural resource management practices must be recognized and supported by the funding structure” of these federal programs.

Dr. Johnson has called for expanding federal conservation programs to tribal communities and acknowledging IAK as valid, time-tested, and replicated conservation practices eligible for federal funding. However, improving federal programs to reduce barriers for tribal participation and getting the federal agency (USDA) to approve IAK conservation methods is a complicated process—not only due to the bureaucracy involved with changing policy and legislation but also because of the need to expand a system that is designed around conventional commodity-based agriculture to one that also recognizes and supports Indigenous, subsistence farming.

In 2021, the federal government issued a memorandum that commits to elevating Indigenous Traditional Ecological Knowledge (ITEK) in federal scientific and policy processes and works to give federal agencies the tools they need to ensure Indigenous knowledge is appropriately considered and elevated. It also recognizes “ITEK as one of the many important bodies of knowledge that contribute to the scientific, technical, social, and economic advancements of the United States and our collective understanding of the natural world.”

Tribal lands in northeastern Arizona, like much of the Southwest, have been drying up due to the worst “megadrought” experienced over the past 1,200 years, which has been exacerbated by human behavior. With extended drought conditions (and more intense winter freezes), crops dry up quicker, growing seasons are shorter, and harvests are smaller. Reserves of preserved corn are dwindling and the ability to replenish them is diminishing. As climate change intensifies, it challenges the Hopi’s ability to rely on the rain and threatens their connection to the corn and the Hopi way of life. 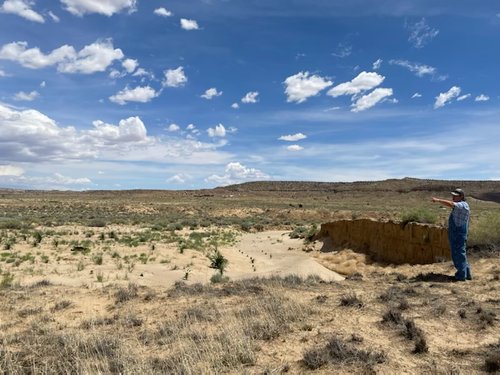 Despite the many challenges that occur when different worlds come together, Dr. Johnson works faithfully to preserve the Hopi tradition of dry farming. For him, hope lies with the Hopi youth. Dr. Johnson regularly hosts youth workshops and classes, bringing them out to his corn fields and sharing ancestral stories about seeds, corn, and water. He stresses the importance of knowing and practicing Hopi traditions and how those traditions teach patience, faith, caring for the land, and humility. He explains that without Hopi stories and ceremonies, people forget who they are and fill the void with other things or behaviors that would have been fulfilled by traditional practices like corn planting parties.

Hopi stories recount times when drought and famine tested the Hopi people’s resilience and faith. And, Hopi prophecies warn about unknown catastrophes that could/will one day befall the world. However, for Dr. Johnson —or because of Dr. Johnson— the Hopi dry farming planting cycle continues as it has for hundreds of generations. Hopi corn plays a role at every stage of Hopi life—from placing a perfect ear of Hopi corn beside a newborn baby to using cornmeal to send off loved ones into the spiritual world. Corn is resilient and the center of Hopi ceremony. Because their farming—and culture—is centered on survival, Dr. Johnson is hopeful that Hopi farmers will be able to adapt, just as their corn has for over two thousand years.