For Indigenous people, storytelling has been much more than a means of entertainment for thousands of years. Native communities have employed storytelling as the primary mode of communicating cultural beliefs and community values, as well as critical ecological, historical, and spiritual knowledge to the next generation since time immemorial. Storytelling has allowed Indigenous people to make sense of the world and their relationships within it, to teach cultural values, local ecological knowledge, regional and family history, sacred stories, and about significant events. Before brick-and-mortar Western school systems were built, Indigenous communities leveraged the art of storytelling through dance, song, and oral storytelling (among other forms) as their primary means for educating, engaging and motivating fellow community members. Despite concerted efforts by Federal Indian Boarding Schools and other colonial systems to stamp out traditional storytelling and knowledge transmission, Indigenous communities are revitalizing their rich communication traditions today and working to reclaim their narratives.

Revitalizing Indigenous storytelling practices is perhaps more important than ever before, given that the stories depicting Indigenous communities today are often crafted by non-Indigenous people, which can lead to inaccurate and damaging portrayals of Native people. Mainstream media and news outlets often only highlight aspects of Indigenous stories that focus on vulnerabilities; a practice which too often paints a picture of Native people as only victims rather than innovators, leaders, and powerful change agents. Far too frequently, non-Indigenous-led news outlets cover only one aspect of Native stories that paint them as static, rooted only in the past, and/or perpetuate harmful stereotypes. In addition to perpetuating inaccuracies, non-Indigenous storytellers are more prone to inflict harm on communities through “parachute journalism” techniques (defined as when media producers are sent to report on a community in which they have little or no prior knowledge or connections to tell a story, and then leave after the story’s publication). Non-Indigenous journalists often report on Indigenous issues and communities without concerted efforts to build lasting, reciprocal, meaningful relationships with the communities they engage with. These practices are extractive in that they position Indigenous people as entities to be studied and/or described with little to no prior consultation or meaningful involvement by community members.

The problem with underrepresentation of Indigenous people in multimedia is also an issue of environmental injustice. Although Indigenous communities are disproportionately impacted by climate change, pollution, and global biodiversity loss, only a very small percentage of scientists, professors, and environmental journalists at U.S. universities and news organizations are Indigenous. By failing to listen to those communities most adversely impacted by global change, media outlets perpetuate inequities felt by global warming. Indigenous people must be part of the conversation if we are to paint a more complete picture of the impacts of climate change - not just on livelihoods, but on cultural and spiritual practices. Indigenous ways of knowing also offer invaluable frameworks for fighting biodiversity loss, overexploitation, and global warming.

In an effort to center Indigenous storytelling, we’ve launched the Ilíiaitchik: Indigenous Correspondents Program, or the “ICP” for short (the program's name derives from the Biiluuke/Crow word ilíiaitchik, meaning "to speak good words").

The ICP is a 10-month community-building and skill-building program designed for 10-12 Indigenous university students focused on environmental storytelling. Jointly supported by The George Washington University School of Media and Public Affairs and UArizona’s AIRES Education Initiatives and the Indigenous Resiliency Center (IRes), the program’s ultimate aim is to create a space for Indigenous storytellers to sharpen their communication skills, showcase their stories to a national audience, and build a supportive community of fellow Indigenous writers, filmmakers, audio producers, and artists in the process. We hope to accomplish these objectives through each participant publishing and editing a storytelling piece on Planet Forward’s platform after working with our Indigenous Editor, in addition to monthly skill-building workshops led by Indigenous experts in the communication sphere, and social networking events.

This year’s program launched in early September with a total of 12 students representing 11 different tribes and 7 universities comprising the cohort (note: be sure to check out bios for four of this year’s correspondents, below). Our first workshop, titled “Healing through Storytelling” was led by published author, documentary filmmaker, and traditional beadworker Cinnamon Kills First. Cinnamon is Northern Cheyenne but currently resides in Chinook territory where she owns and operates Northside Advocacy LLC. To begin the workshop, Cinnamon shared her experiences authoring books that honor her identity as an Indigenous woman, including her illustrated children’s book titled “Go Dance” which follows the story of a young boy gaining courage while attending a powwow. Cinnamon answered the Correspondents’ questions about how to craft stories that don’t re-traumatize Indigenous readers and authentically represent community practices. She then guided the Correspondents through a reflection exercise focused on reclaiming narratives and recentering the body and heart when encountering potentially upsetting stories written about Native communities by non-Indigenous reporters, ethnographers, etc. We closed the workshop session by writing and then sharing short “six-word stories” describing experiences where we have felt comfortable outdoors and supported by our communities. As one Correspondent reflected following the workshop, “I liked the guided 'meditation' - this workshop could be even longer and spread out over a few days. The material was really engaging, and I especially loved thinking about how to craft stories that focus on the harsh realities my community currently faces, but also don’t center solely on the trauma.”

We also recently held our first team Social Meet & Greet event, attended by UArizona and Planet Forward staff members who provide critical support for the program. Correspondents shared their perspectives on effective storytelling techniques and spoke about their backgrounds and personal interests in breakout rooms with UArizona and Planet Forward staff members. We look forward to holding more social events in the coming months as we prepare for the cohort convening in person at the 2023 Planet Forward Summit in Washington, DC.

To close, we’d like to introduce four of this year’s Indigenous Correspondents (we’ll be sharing information about additional members of this year’s cohort in future posts): 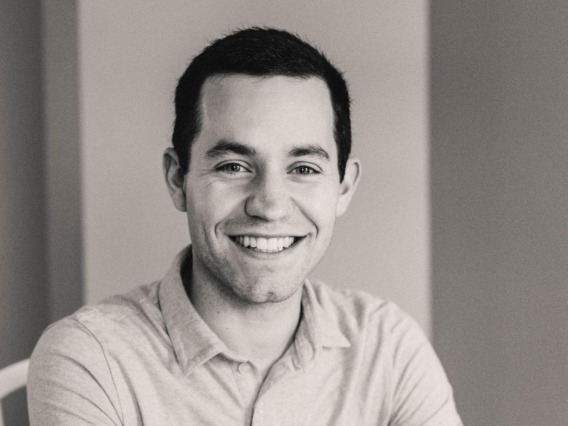 Alexander Cotnoir (he/him) is a citizen of the Nulhegan Band of the Coosuk Abenaki Nation whose  passion for environmental education is rooted in his home in Askaskwiwajoak (the Green Mountains of Vermont), where a love of maple sugaring, hiking, and hunting alongside his grandfather created a passion for environmental stewardship, ecology, and food. As a Dartmouth College undergraduate, he served as a teaching assistant for ecology and writing courses and worked in the university’s archival collections to explore his interest in regional environmental history. Alexander is particularly passionate about exploring how Indigenous communities relate to temperate forests and how climate change is impacting food systems and associated cultural practices in the north. After graduating with a degree in Environmental Studies, Alexander worked in outdoor education programs across Vermont. Alexander recently graduated from GW with a Master of Arts in Teaching and currently works at the Smithsonian National Museum of Natural History. In his spare time, Alexander is training for his first marathon, learning to weave ash baskets, and gardening whenever he can. 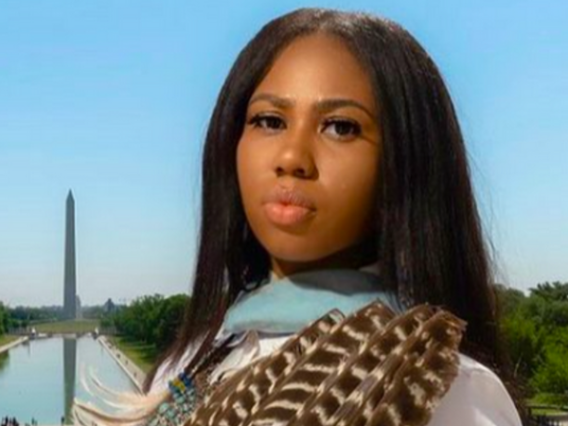 Troi Madison Newman (she/her) is a black-indigenous enrolled citizen of Piscataway Conoy Tribe and a first-year law student at the University of Arizona James E. Rogers College of Law. From 2019 to 2021, while obtaining her master’s degree at George Washington University, Troi researched Missing Murdered Indigenous Women under Dr. Elizabeth Rule, which led to a publishing thesis: “Are Tribal Courts equipped with the knowledge and resources to handle MMIW cases of non-Native perpetrators?” Troi is the Project Artist of the “Guide to Indigenous Maryland” App available in the Apple Store and Google Play.

When Troi is not freelancing graphic designs, she is a part-time paralegal and was previously working with All Native Group (ANG), a government contractor for Ho-Chunk Inc. of Ho-Chunk Nation. Troi has a strong interest in Environmental Law, specifically focusing on racial discrimination in environmental policy-making, enforcement of regulations and laws, and the deliberate targeting of indigenous communities 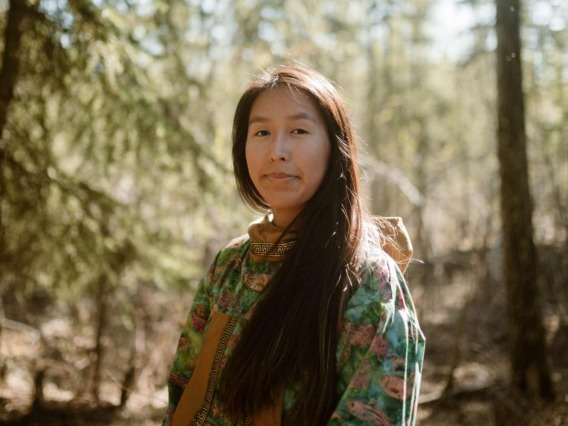 Shondiin Mayo is originally from Stevens Village, Alaska, and grew up in both Fairbanks, Alaska, and the Navajo Nation. Shondiin is both Dine and Koyukon Athabascan. Shondiin’s childhood was influenced by the subsistence lifestyle of fishing and living in a rural Alaskan village as well as spending time on the reservation with her family. There, she learned values such as an appreciation for the land, preservation of traditional knowledge, and the responsibility to continue her heritage for the next thousand years.

Shondiin recently graduated from Northern Arizona University where she studied Creative Media and Film with an emphasis in Documentary and a minor in Ethnic Studies. Amid the Covid pandemic, Shondiin returned home to Alaska and completed a 10-minute thesis documentary about the cultural erasure of dog mushing due to the advancements of the 21st century. Shondiin’s upbringing in a small community that was only accessible by plane, boat, or snowmachine inspires her to capture her people’s traditional ways of living and knowledge about the environment that surrounds small villages in the Interior of Alaska. 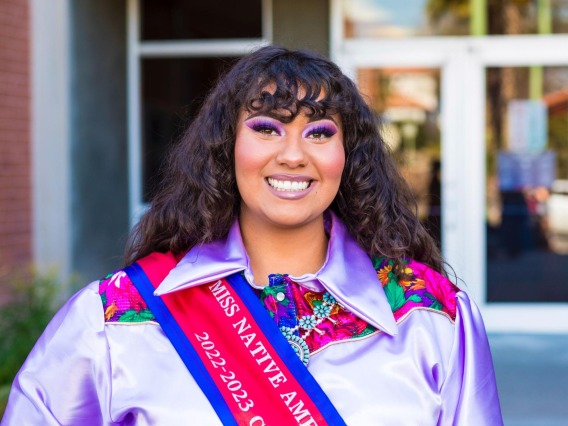 Nadira Mitchell is Diné (Navajo) and an honors undergraduate student at the University of Arizona studying Natural Resources with an emphasis in Wildlife Conservation and Management. She is a student leader in the Tucson Native American community, holding the title Miss Native American University of Arizona First Attendant 2022-2023, and a board member of the Southern Arizona Regional Science and Engineering Foundation. A life-long resident of Tucson, Nadira is passionate about the Sonoran Desert, conducting wildlife conservation research using wildlife cameras, and helping lead American Indian Student Initiatives. In her first year at UArizona, she became a founding member of the American Indian Student Initiatives (AISI). The student-run organization’s goal is to reduce environmental injustices for Indigenous communities in the state of Arizona. Nadira is interested in the integration of Indigenous perspectives in wildlife, Tribal lands, and natural resources policy. She aspires to advocate for environmental equity in Indigenous communities.

Wliwni (thank you) for reading and we look forward to updating you as this year’s cohort begins developing their communication stories for submission in the 2023 Planet Forward StoryFest competition. Stay tuned as we introduce additional members of the cohort.